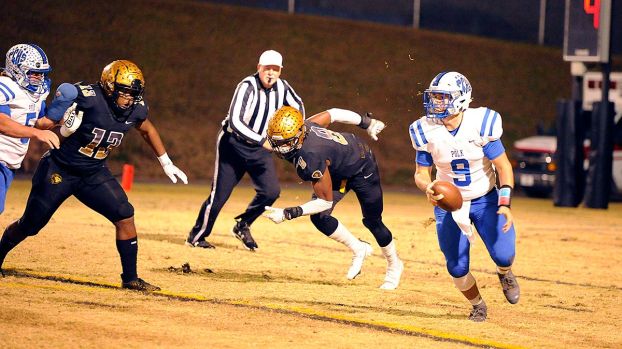 Daylin Lee sizzled, and that largely melted the snowball’s chance that Polk County hoped to have Friday night.

The Shelby junior quarterback set a single-game school record with 498 passing yards, just shy of 400 of those in the first half, and threw for four touchdowns as the Lions claimed a 42-20 victory over Polk County in a second-round 2A state football playoff clash at Blanton Stadium.

Lee’s first half seemed, at times, almost video game-esque. He connected on his first nine passes of the night for a remarkable 357 yards and the four scores, finished the first half with 392 yards, then led Shelby to another scoring drive in the third quarter before watching the final period from the sidelines.

Lee’s passing total broke the school record of 486 yards set in 2015 by his brother, Darquez Lee. He hit 17-of-22 attempts during the evening.

Polk County played without starting safety Keaundrae Green, sidelined with an illness. Lee was so locked in that Green’s presence might not have altered the proceedings.

“They just torched us down the middle of the field,” said Polk County head coach Bruce Ollis. “Most of their receiving yards came after the catch. They’ve got dynamic speed, the quarterback delivered the ball and they found the open grass.”

But the night didn’t belong solely to Shelby (11-1), which advanced to a third-round meeting with East Gaston. Polk County (7-4) battled to the final whistle, putting together scoring drives of 90 and 99 yards in the fourth quarter. Mackus Simpson again delivered a couple of highlight film-worthy runs and had a career-high 123 yards rushing plus a touchdown. The Wolverines finished with 248 yards rushing, 310 total yards and didn’t turn the ball over. Senior Steven Chupp had two scores, including a touchdown grab with 3:25 remaining on the final reception of his high school career.

It would have been easy for Polk County to go quietly into the cool night after Lee’s fireworks. The Wolverines did not.

“I was so proud of the way we played (in the second half),” Ollis said. “A lot of teams might have rolled over a little bit. Our guys came back out and we executed and played hard.

“They subbed out some, but the bottom line is that you still have to come out and play them. I told them at the end, when we got together as a unit, that I was really proud of how we finished this ball game. That was  a finish-strong moment for us, too.”

Shelby scored on its first four possessions, but Polk answered with an eight-play 66-yard scoring drive midway through the second period. Casey Beiler’s 21-yard scramble on a fourth-and-10 set the stage for a 14-yard touchdown toss to Chupp, with Beiler standing against a strong Shelby rush until the last second before firing a strike near the back of the end zone. Logan Nodine’s extra point made it 28-7.

Shelby responded with a quick score, then added another late in the third period for a 42-7 lead. Polk County came right back with an 11-play, 90-yard march, with Simpson ripping off runs of 16 and 10 yards before scoring from the 4 to make it 42-13.

A long kickoff return left Shelby at the Polk 10, but the Wolverines stopped the Lions at the 1. Simpson uncorked a 51-yard sprint to move Polk into Shelby territory, and Beiler then teamed with Chupp for the final time on a 28-yard touchdown pass, with Nodine true on the extra point with 3:25 left in the game.

“We’ll go ahead and start getting ready soon for 2022,” Ollis said. “Not a bad year. We did a lot of good. We played four incredible teams (Salisbury, Hendersonville, Chase and Shelby). We didn’t win any of those, but going forward, that’s going to help us as a football program.”