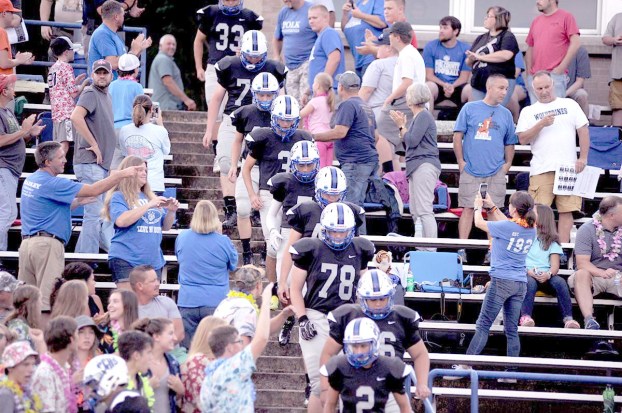 Per executive order of Governor Roy Cooper and North Carolina High School Athletic Association rules, only 100 fans are currently allowed to attend any outdoor sporting event. That restriction applies to all sports, including the current boy’s soccer season as well as the upcoming football season.

In accordance with the NCHSAA guidelines, no general admission tickets will be sold this season for home football games. Both Polk County High School and Polk County Middle School plan to allocate their 100 tickets to players and cheerleaders to provide to their families.

All fans who do attend home events will be required to wear masks and remain socially distanced from other fans while in the stands. There will be no concessions sold at home football games. Fans will be allowed to bring small food items to games.

No fans will be allowed to attend away games this season.

A ray of hope for changes to the 100-fan limit surfaced Tuesday. Cooper’s executive order expires February 28, and NCHSAA Commissioner Que Tucker notified member schools that the Association has been asked by the North Carolina Department of Health and Human Services to join a discussion on plans for what happens next after the expiration of the order.

Local football fans will still be able to view each regular-season game this season. All Polk County High School home games will be streamed live on NFHS Network. Fans buying either an annual pass or a monthly pass to the NFHS Network will receive the following:

Passes can be ordered here: https://www.nfhsnetwork.com/. Fans should specify Polk County High School as the school they support when ordering even if passes are being ordered to watch PCMS road games.

Polk County Middle School plans to stream both of its regular-season home games on YouTube.

Polk County High’s road games at Madison and Mitchell are expected to be streamed live as well. Madison has been using YouTube for all events thus far this season while Mitchell

Whole lot of quiltin’ going on