It’s not just any old day at The Junction. It is Wednesday.
Wednesday is Pork Chop Day, and you’ll find local devotees waiting on the front porch for them, well before opening time!
In fact, if you don’t grab your pork chop on the first trip through the buffet, you might miss out. But – as many customers will tell you, it is worth the wait and a second trip through.
On Wednesday’s, besides pork chops, they also serve their perfectly crispy and tender fried chicken. As you create your plate, you’ll find black-eyed peas, homemade macaroni and cheese, chicken casserole with their house made dressing, corn on the cob, a full salad bar and fresh-baked biscuits, to name just a few of the items. 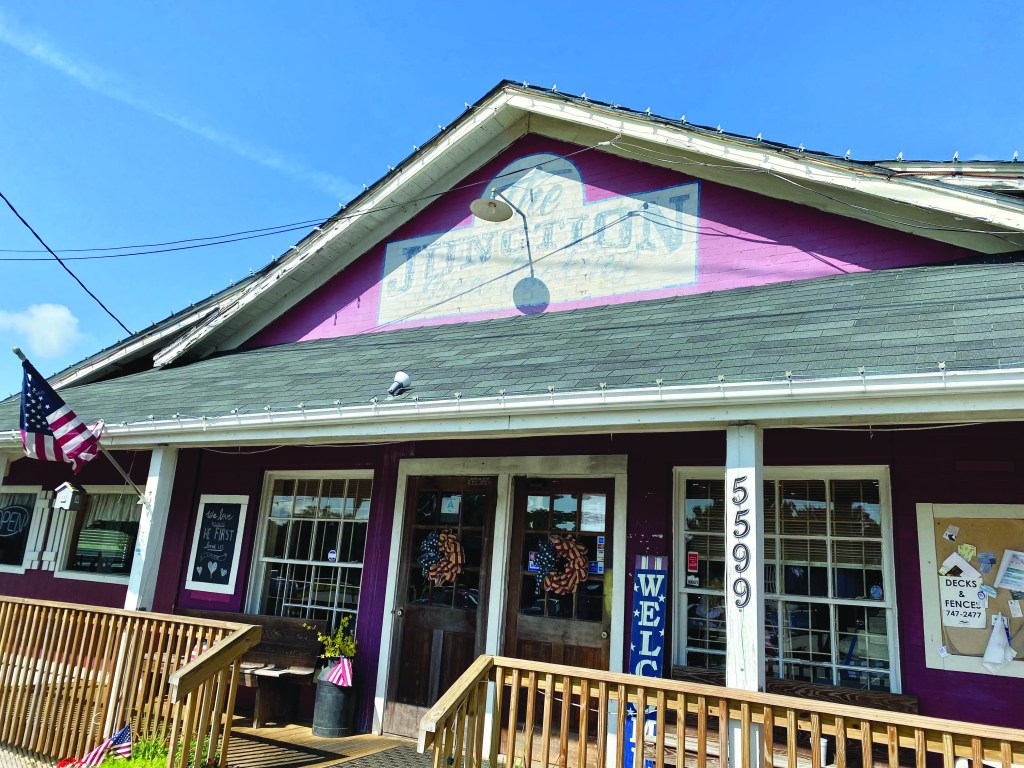 Serving customers since 1992 at their Gowensville location, owner Kim Pearson and her family have perfected the art of cooking all the Southern-style favorites. It’s not just their pork chops and chicken they are known for, they are also famous for their fried green tomatoes. A few years ago, they were featured on the Food Network with celebrity chef and Greenville native Tyler Florence for this specialty. In fact, many restaurant owners in Greenville and Spartanburg have since asked Kim for this recipe which they now often serve as appetizers. When dining at The Junction though, you will find them among many other vegetable sides in their weekly buffet offerings.
“When my girls were little, we had the restaurant then and I would take them out in the fields. No one picked the green tomatoes. So, me and the girls, we would get our buckets and go out in the fields with my Dad, and we would go pick the green tomatoes so we could have them for the restaurant,” Kim says.
Upstate patrons come in weekly from Gowensville, Campobello, Landrum, Spartanburg, Greenville and beyond. After they were featured on the Food Network, they even had customers from as far away as West Virginia and New York visiting the restaurant and writing articles about their food tourism journeys. “I was shocked,” says Kim. “But they said ‘We read the article and we saw the video, and we had to come!” 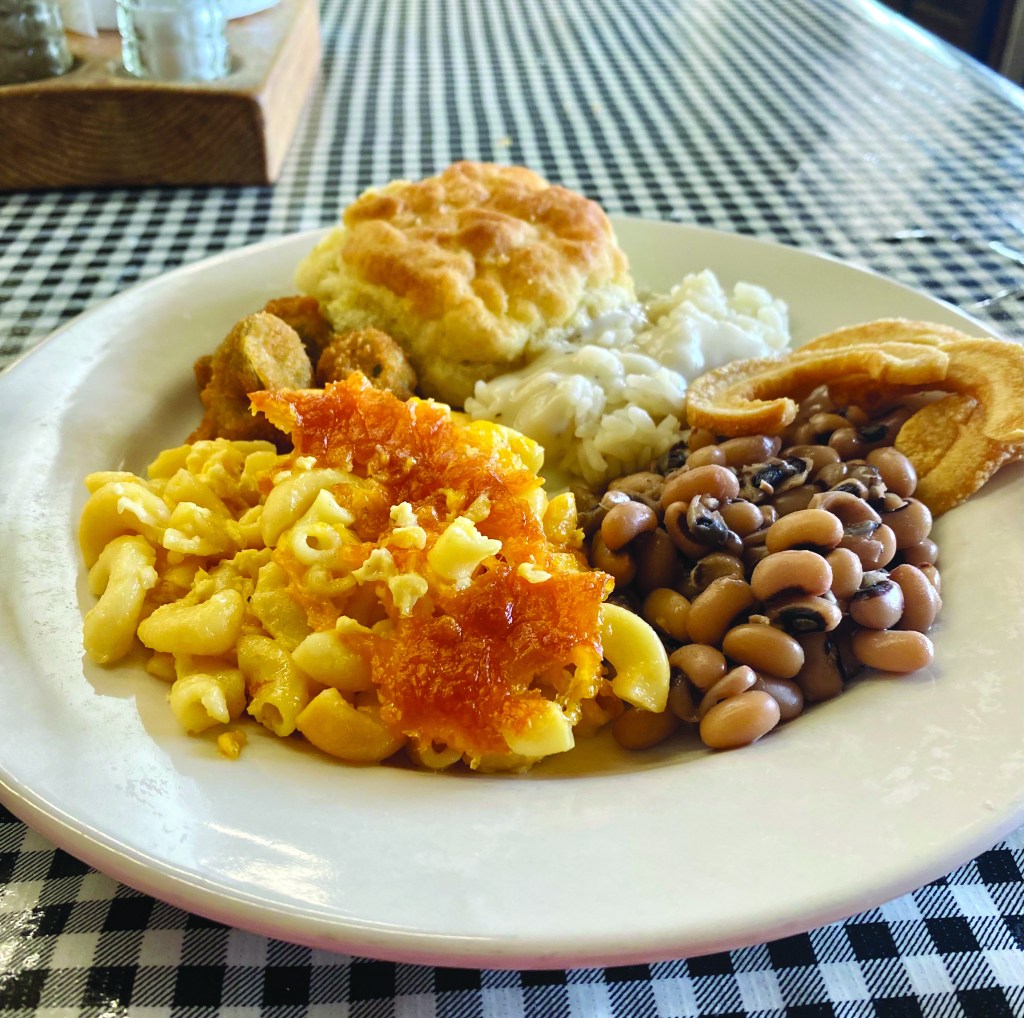 Florence asked local friends which restaurants should be featured. Six of the eight told him he had to do a piece on The Junction, proof that after twenty-nine years in business, it has become a well-known and loved establishment in our area.
Inside the restaurant, you will immediately notice the murals on the walls, all painted by local artist Joe McKinney beginning in 1996. The murals depict local landmarks and the beauty of our area. At the register area, you will find a small country store where you can buy their popular and humorous T-Shirts, as well as food items like fresh baked cookies and other desserts to take home.
Another unique and interesting feature located in the dining room is the table with a porch swing for seating, an idea from Kim’s dad, Rod. The swing is something that customers who have been visiting the Junction since they were children always remember. When they came to eat with their parents, they always wanted to sit in the swing.
After Rod bought the restaurant, Kim moved to Gowensville to run it, and her parents would come help on the weekends. With a background in bookkeeping and insurance, Kim didn’t know much about the restaurant business.
“My Dad called me up and he said ‘I bought a little restaurant in the country. You know how to cook. You were a kid in the kitchen with your grandmother! And you know how to multiply!” And I said, Dad, it’s not that easy.” But through trial and error, the best way to learn, Kim was quickly on her way to success.
The family even branched out to open a very popular second location in Spartanburg, which her father ran. After Rod’s passing several years ago, the decision was made to scale back down to the original location here in Gowensville. “After Daddy died, I thought I can only do this one. I just want to do this with my family,” Kim says.

When they first opened, business was a little slow. Just when Kim was starting to make money on the restaurant, her father called her. “He called me up right before Father’s Day that year and he said, ‘Kim, I just ran an ad in the paper. ‘All Father’s eat free on Father’s Day.’ I said ‘Dad, I am just starting to make money. You are going to put me out of business!’ But I remember, I broke even that day. I had a line out to the stop sign at 10 o’clock, an hour before we opened. We got everyone in and fed that day. We ran out of food right near the end. It scared me! But ever since that Sunday, we’ve had a line at the door.”
Kim’s recipes were family ones, but also many were gathered from local church cookbooks. Kim’s mother Roxy still helps in the kitchen doing all the baking. During the last year and a half, they have also expanded by preparing a lot of pre-packaged and special dishes for seniors and others who were home-bound during the pandemic. Kim says she does not see that business going away any time soon. Like many local restaurants, building back after the past year has been challenging, and they are currently looking for additional wait staff as their restaurant and event catering business has quickly ramped back up.
Besides the pork chops, “People love our Chicken. Our chicken is all-natural. It’s not injected with anything. We do it fresh, we do it in the egg wash just like my grandmother did when I was growing up.”
“We stuck to the basics, and she always said ‘Don’t reinvent the wheel, just do it like we’ve always done it,” Kim says. When it comes to classic Southern fare, the Junction’s formula most certainly stands the test of time.

Life in our Foothills September 2021 – The Flying Lanes

The Story of a Traveling Trapeze Artist By Macy Cochran Pat Lane reflects on his years in the circus When... read more