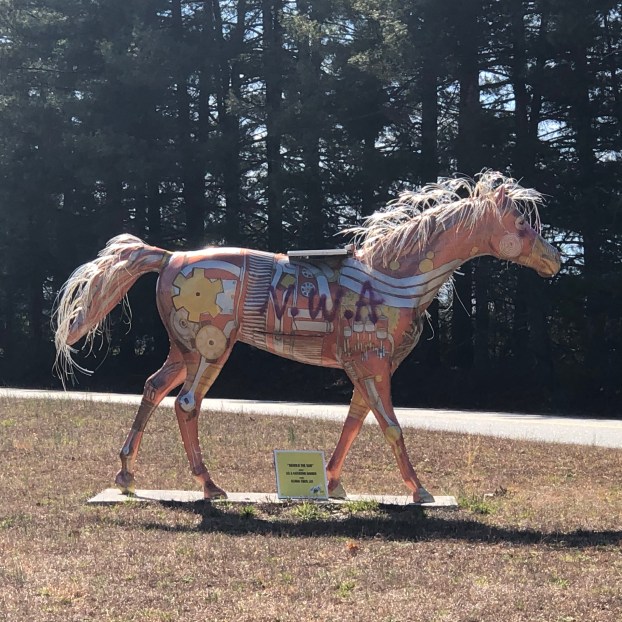 The Polk County Sheriff’s Office has identified several teenagers they believe are responsible for recent vandalism, including this horse statue at the corner of Little Mountain and Peniel Roads just outside Columbus. The horse has since been repaired. (Photo by Leah Justice/Tryon Daily Bulletin)

COLUMBUS—Several juveniles have been turned over to the Juvenile Court Counselor for being suspected of vandalizing multiple items in Polk County.

The Polk County Sheriff’s Office said after consultation with the North Carolina Department of Juvenile Justice and Delinquency Prevention, investigators with the sheriff’s office identified several juveniles believed to be responsible for the damages.

Damages around the county included the horse statue at the corner of Little Mountain and Peniel Roads, a church in Green Creek, a church in Columbus and a welcome sign in Hunting Country in Tryon. The vandalism included spray paint of N.W.A. The artistic horse has since been repaired.

The vandalism occurred a couple of weekends ago.

The sheriff’s office said in a release this week that deputies responded to multiple reports of vandalism in the Hunting Country and Columbus communities and after a thorough investigation identified the juveniles they think are responsible for the damages.

Investigators applied for several juvenile petitions, which were issued and turned over to the local Juvenile Court Counselor for prosecution through the juvenile court system.

“We’ve all been teenagers and done some things we regret, however defacing and damaging personal property will not be tolerated in our community,” Polk County Sheriff Tim Wright said in the release. “I’m proud of my investigations division and their close work with Juvenile Justice officials and trust in our Juvenile Court System to address the matter appropriately under our current laws.”

For more than 50 years Tryon Fine Arts Center has stood proudly on Melrose Avenue – a home for Tryon’s... read more