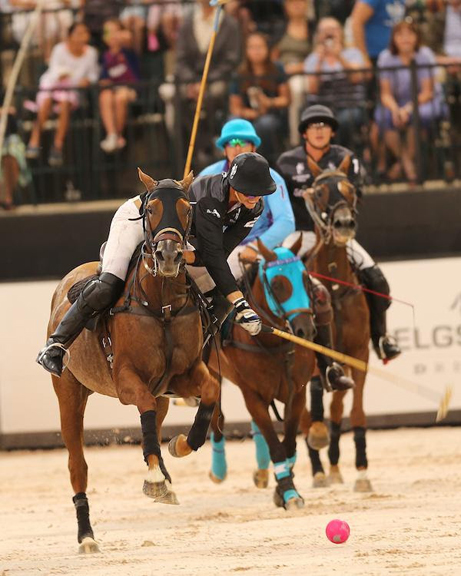 MILL SPRING—On Saturday evening, equestrian fans that were fortunate enough to catch the matchup between Team Charlotte ad Team Greenville at the Tryon International Equestrian Center were treated with a thriller. The game went down to the wire with Team Greenville claiming victory 9-8 for the second consecutive year.

Mark Bellissimo, Managing Partner of Tryon Equestrian Partners, created Gladiator Polo to help expand the equestrian sport to a larger demographic. Gladiator Polo combines elements of both Field and Arena Polo to create a faster, more high intensity game to engage a broader range of spectators and fans. This is the third season that Gladiator Polo has been played at TIEC, and this was the second consecutive meeting of Team Charlotte and Team Greenville in the TIEC arena.

After the match was concluded, Felipe Viana of Team Greenville was awarded the Most Valuable Player accolade.

The matchup was Viana’s first time competing at TIEC. In an interview immediately following the match he stated that everything clicked right away for the team and that they felt comfortable playing together. Viana went on to say you have to get lucky in Gladiator Polo, that the games are always fast paced and tight in the score line.

Viana heaped on the praise for the way that equestrian sport is embrace in the area. “This is my first time in Tryon. It’s a blast, and its amazing,” Viana said. “It’s awesome to see the sport (get this level of exposure) and everyone that plays polo will agree with that.”

Throughout the week prior to the match, both teams helped coach junior athletes in a Ninja Polo camp at TIEC to help them develop their skills. The participants in the camp played a brief, two-chukker game prior to the main event to showcase their newly learned skills.

Team Greenville took home the top prize after the game, winning $21,000 while Team Charlotte took home $12,000 for their efforts.

Polk County’s Wolverines 12th Man will hold a kickoff celebration for the 2019 football season on August 10 at Caitlyn... read more