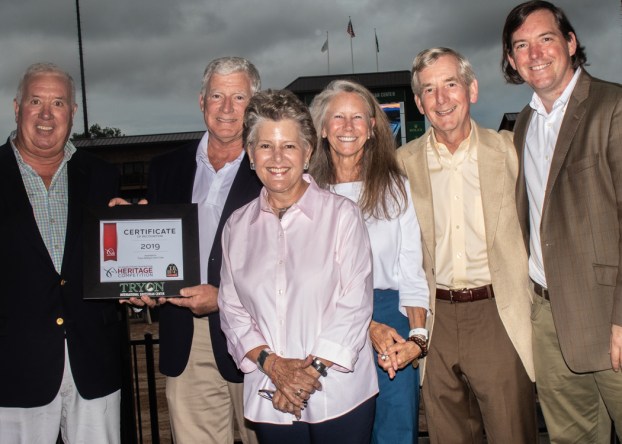 The Tryon Riding & Hunt Club (TR&HC) flag flew over the Tryon International Equestrian Center last week during the 91st edition of the annual TR&HC Charity Horse Show. This year’s edition of the show was special as it was awarded “Heritage Status” by the United States Equestrian Federation (USEF) during a celebratory dinner on Friday evening, joining an elite group as one of the oldest horse shows in the country. Bob Bell, the official USEF delegate, presented the Heritage certificate to a collection of TR&HC past presidents including Tim Brannon, Drew Brannon, Ann Troppmann, Nancy Wilson, and current president Terry Lynch. A brand-new video filmed by Erik Olsen documenting the history of the show was premiered at the dinner.  The show has evolved and grown, from the first show held at Harmon Field in 1926 with six entries, to the current location at TIEC with 526 entries from all over the world.

One highlight of the week was a $50,000 International Hunter Derby held on Friday afternoon. Preceding the class was a course walk, open to the public and hosted by famous derby rider Liza Towell Boyd and her father, Carolina Show Hunter Hall of Fame trainer Jack Towell from Finally Farm in Camden, SC. They educated the crowd answering questions about what the course asked of horse and rider. As always, the Towell’s thoroughly entertained everyone with fascinating anecdotes and stories. In the event, One Request, a stunning chestnut gelding with Daniel Geitner aboard, triumphed in a field of 21 horses over the two rounds of competition.

The $204,000 Coca Cola Grand Prix was moved to Sunday morning due to torrential rains that came through late Saturday afternoon. Kelli Cruciotti and Hadja van Orshof bested a field of 29 entries.

A new accolade introduced this week was the “trip of the day” award. Each day throughout the week the rider with the highest scoring hunter round received a $500 prize and special commemorative ribbon thanks to generous daily sponsors. This innovation is sure to be a big hit going forward.

Sunday concluded a fantastic week of showing with the awarding of the beautiful TR&HC perpetual trophies to division champions. Two new trophies were donated to the collection this year.  The Maude Carr Perpetual Trophy donated by her family in her memory was awarded to Elle Gibbs on Ferrari, the champion of the 3’3 Junior Hunter Division. The Ernst “Pete” Mahler Perpetual Trophy donated by friends of Pete Mahler went to As You Wish, the champion of the Green Hunter Division.  He is owned by Ashley Runnels and ridden by Holly Shepherd.

All in all, the show was treat – in more ways than one. From breakfast treats on Sunday morning, to horse and rider treats available each day, TR&HC made their 91st Charity Show another of their many special events as they continue to promote equestrian sports in the area.

Melanie Smith Taylor to Teach Clinic in the Foothills