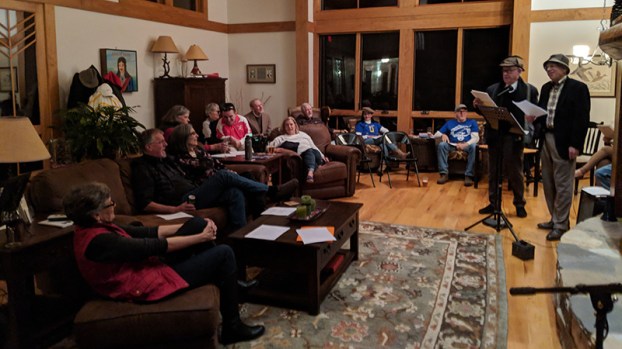 William Gillette (1800-1933), one of Tryon’s most famous former residents, was honored with a tribute at a recent production of the Pinnacle Falls Old Time Radio Theatre.

It was the noted actor and playwright who brought Sherlock Holmes to life in his play, “Sherlock Holmes,” that opened on Broadway in 1899. Gillette wrote the play at Thousand Pines, his 900-acre estate high above Tryon, in concert with Sir Arthur Conan Doyle, the author and creator of the Sherlock Holmes adventures.

One of those stories, “The Musgrave Ritual,” was adapted for radio and directed by North Carolina playwright Ceille Baird Welch.

Gillette got off the train in Tryon in 1891 when it stopped to add another engine for the climb up the Saluda Grade. He took a walk up the mountain and fell in love with the area and built a cabin where he could see the mountain ranges.

For 50 years, he was a major star on Broadway and theaters around the world, and his play, “Sherlock Holmes,” brought in $1.5 million in box office ticket sales.

The premiere performance, starring Ralph Johns as Sherlock, was staged at the Bill Amick Lodge in Pinnacle Falls, a gated community in Zirconia, North Carolina.  Johns practiced medicine in Spartanburg for many years.

The production has been scheduled for a February performance in Columbia, South Carolina, at a meeting of the Hansom Wheels, a Scion Society of the Baker Street Irregulars.

Cooking chores are often shared in today’s households, but that was not always the case. Many men have never had... read more