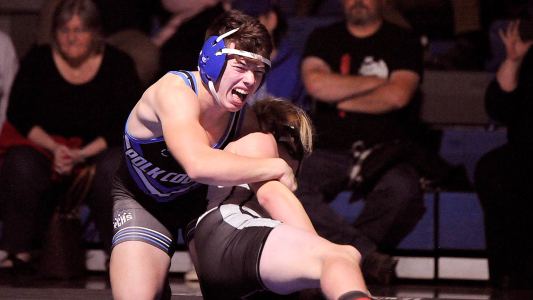 “I wouldn’t mind seeing some 220, 250-pound big guys walking in,” said Wolverine head coach Scott Taylor. “That would really help. We had to wrestle a few guys up a weight class.”

That shuffling in the upper weights did little to spoil a good evening for Polk, which defeated Rosman 54-18 before falling 48-30 to Pisgah in the nightcap of the tri-meet. Pisgah topped Rosman 66-18 in the night’s other matchup.

The Wolverines have a handful of seniors mingled with some newcomers to the program, and the experience certainly paid off in both matches. Seniors Satchel McCoy, Bryson McCraw, Collier Foster and Jacob Knighton each won both of their matches, with fellow seniors Tori Strickland and Deaken Nodine each picking up a win.

“We’ve got some seniors this year, which a a bit different from last season,” Taylor said. “That’s going to help a lot with leadership. We’ve also got some new guys who were able to step up.

“Pisgah is always tough, but we want those competitive, tough matches. I think we did a lot of things well. There’s definitely room for improvement, but I’m already seeing improvement since Day One. We’re getting better every day.”