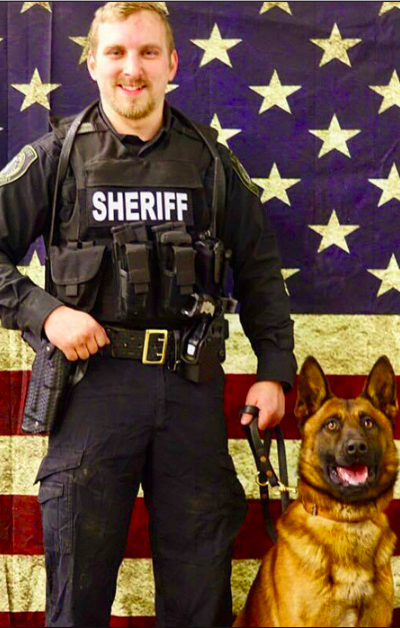 Handler Joshua Kujawa and K-9 Karak when Karak was first trained in 2018.

K-9 Karak, a Belgian Malinois, was retired to be given to his handler, officer Joshua Kujawa.

Commissioners met last week and approved a resolution that declared Karak as surplus. The resolution gives the dog to Kujawa to care for him for the rest of the dog’s life and holds the county harmless for any further costs of his care.

Polk County Sheriff Tim Wright spoke to commissioners prior to them approving the resolution.

“It’s quite an honor and duty to work in law enforcement and have a K-9,” Wright said. “The hours you put in for training, then when you go home you have a pet. It becomes your partner.”

Karak began working with the sheriff’s office in early 2018 when he was 2 years old.

Karak was trained by Shallows Creek Kennels in Pennsylvania and was trained to locate 6 different narcotics, trained in tracking and article location.

Karak’s first day on the job resulted in two arrests for meth and the dog also on his first day assisted a local agency that resulted in the seizure of approximately $10,000.

While Karak is being retired, the sheriff’s office currently has 4 other trained K-9s.