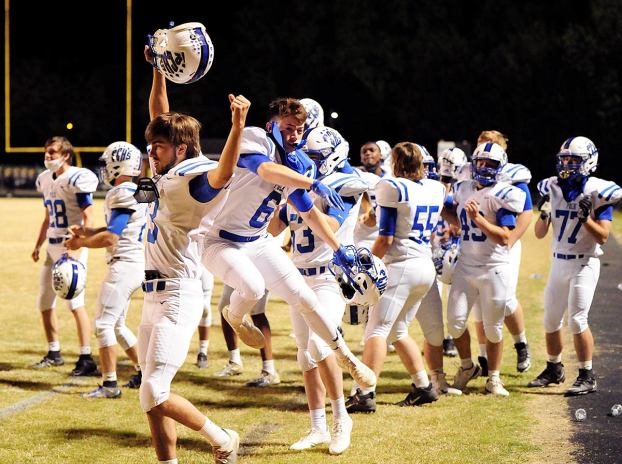 On to the Regionals

Why not, Polk County?

In this most unconventional of football seasons, why not make some school history? And why not do so by handing off 34 times to your sophomore running back? Or scoring once on special teams and once on defense? Or getting perhaps the two most important plays of the season from a freshman who no one even expected to be playing football this year? And do all of that after having not played a game in four weeks?

Why not, Polk County?

A Western Regional final appearance awaits Polk County for the first time, the Wolverines securing a trip next week to East Surry with a 30-27 victory Friday at North Rowan in a 1AA quarterfinal affair.

The win, Polk County’s third in the past four postseasons over North Rowan, never lacked for excitement. The Wolverines (6-1) led by 20 points in the first quarter, trailed by halftime, regained the lead, lost it again and then reclaimed the upper hand with 6:07 remaining in the game.

North Rowan (5-3) had a last shot at flipping the scoreboard once more. But Kyree Sims’ deep pass toward the end zone outdistanced everyone except Polk County senior Shane Parris, who hauled in the throw over his shoulder as if he were the intended target. The interception with 2:44 remaining returned the ball to the Wolverines, who never let go.

“I was honestly just hoping I could catch up to it,” Parris said. “It was in the air so long that it gave me time to get under it. That’s really all there was to it.”

Really, there was much more to it. Sims tested Polk County’s defense from kickoff to Parris’ pick, throwing for 269 yards and two touchdowns while rushing for 94 yards and two scores. He connected repeatedly with sophomore Amari McArthur, who had 11 catches for 169 yards, part of a North Rowan attack that topped 400 total yards.

Polk County countered with its own offensive force – Angus Weaver, he of the 34 carries. Weaver’s career-best 230 yards were hard-earned, with only five of his rushing attempts garnering 10 or more yards. He bulled inside, he occasionally broke outside, he fought off cramps in the second half to score the game-winning touchdown.

“We kind of rode old Angus Weaver’s shoulders,” said Polk County head coach Bruce Ollis. “We made a decision to go to two tight ends, which balanced them up a little bit. They were getting a lot of weakside pressure and making plays from the back side. We attached that (second) tight end and we slowed that down.”

Then there was freshman Keaundrae Green. Ollis stopped Green one day at school and asked him if he’d be interested in joining the football program. Green agreed, and he’s been in the starting lineup throughout the season. He caught two passes Friday and had a key kickoff return, but his primary contributions came defensively:

“The strip of the ball was incredible,” Ollis said. “He was just relentless, and he pulled the ball away from the kid. That’s a drill we do, we work on stripping the football. Maybe it paid off.

“That’s a freshman making two huge plays that had a lot to do with the outcome of the football game.”

The first quarter proved one Polk will love to remember. A fumbled punt on the opening drive gave the Wolverines the ball at the Cavalier 21, and four straight Weaver runs led Polk to the end zone, with Weaver scoring on a 5-yard carry for a 6-0 Wolverine lead.

The Wolverines added their second score late in the period on a 90-yard drive, with Weaver carrying on seven of those plays, the final one an 8-yard scoring jaunt with 11 seconds remaining. Matias Akers’ extra point made it 13-0.

Polk then struck again immediately as the Cavaliers fumbled the ensuing kickoff. Gage McSwain scooped up the loose ball and sprinted 16 yards to the end zone. Akers’ extra point made it 20-0 with no time left in the period.

The second quarter, though, proved one Polk will love to forget. North Rowan had two turnovers in the first quarter, Polk returned the favor with two in the second. Sims had touchdown passes of 34 and 18 yards, plus a 5-yard scoring run, as the Cavaliers rallied for that 21-20 lead at the break.

The Wolverines fumbled deep in North Rowan territory on their first drive of the second half, but that still led to two crucial points, those coming when defensive pressure forced Sims to commit an intentional grounding penalty in the end zone, giving Polk a safety and a 22-21 lead.

And now it’s on to East Surry to face the defending 1AA state champions.

“What a great feeling for our team and our community and our school,” Ollis said. “We’re looking forward to the challenge and the opportunity.

“I just feel so happy for our guys. We hadn’t played in a month, and for them to stay motivated and focused and the preparation that we did to get where we got to today is a credit to them. Our coaches did a great job keeping them focused and composed and it turned out to be a W.”

Basement Bunch to perform at FENCE on April 25th at 4pm

Join us at FENCE for a wonderful musical performance by local band, The Basement Bunch. They will be performing outdoors... read more