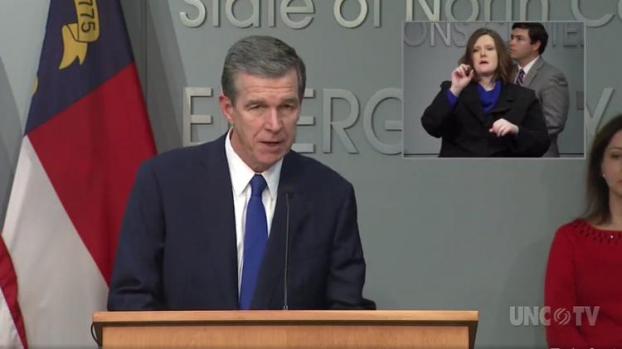 Schools closed until May 15

NORTH CAROLINA—North Carolina Governor Roy Cooper announced Monday that all public schools will be closed until May 15.

Cooper signed an executive order Monday to close schools until at least May 15 as well as to close hair and nail salons as well as massage therapists by Wednesday at 5 p.m.

Cooper said there are 297 confirmed cases of Coronavirus in North Carolina as of Monday morning. He said at least 8,438 people have been tested in the state and at least 10,000 more tests need to be run.

“I know that many parents have been expecting something like this,” Cooper said. “I know this is extremely difficult for you and your children.”

Cooper also thanked the public schools for what they have been doing to take care of students. He said more than 1,100 schools have served more than 1.2 million meals since schools have closed. Polk County Schools is doing pick up meals at all its elementary schools from 11-1 p.m. Monday-Friday.

Cooper said school employees are still out there taking care of our communities like they did before the virus and thanked them for going above and beyond.

Cooper’s executive order also bans mass gatherings of more than 50 people, which closes movie theaters, gyms and other facilities. The new order closes hair facilities, nail salons and massage therapists, with Cooper asking if they could close prior to Wednesday at 5 p.m. to please do so.

Cooper said grocery stores and pharmacies will remain open and asked residents to please not overbuy. He also said some grocery stores are hiring temporary employees, including former restaurant employees who may be out of work. The dine-in restaurant order is still in place, but many restaurants are offering take out services.

Cooper urged people to maintain social distancing and work from home when possible.

“I know that these actions have caused hardship and heartache for a lot of people,” Cooper said. “But they are necessary.”

For more than 50 years Tryon Fine Arts Center has stood proudly on Melrose Avenue – a home for Tryon’s... read more