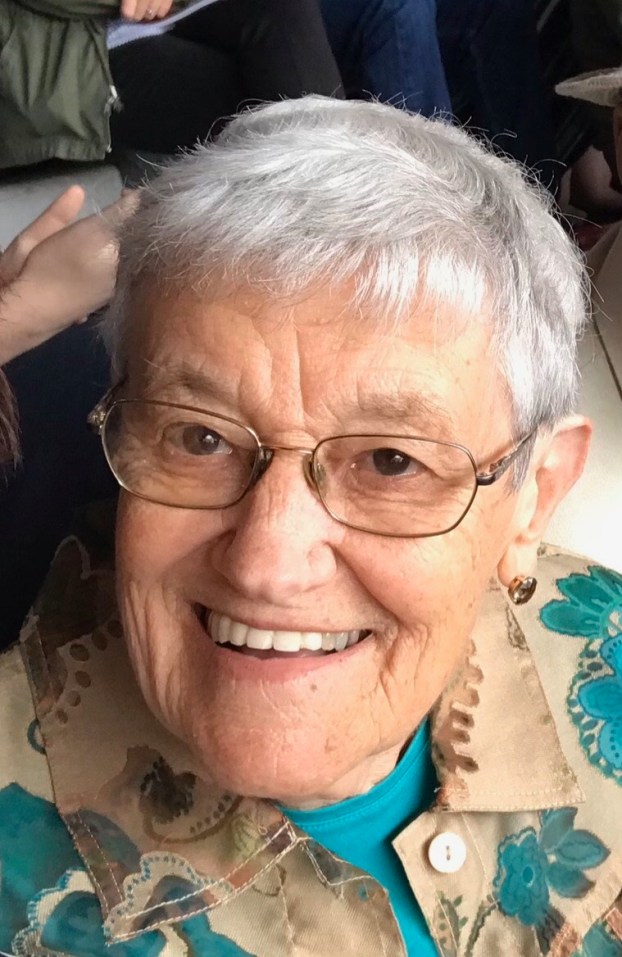 Tryon, NC–Best known as ‘the little woman who is everywhere”, Joan Z. Lonnes (aka Joanie or Bita) lived her life to the fullest right up to her death on March 12, 2020. As engaged and involved as she was for over 51 years in the Tryon community, her presence and participation in almost every aspect of daily life will be sorely missed.

Joan was born at home in Philadelphia, PA, on April 27, 1936, the middle child of Alphonse and Charlotte Zimmermann. At the age of six, the family moved to a farm in Bucks County near Pipersville, PA, where she and her brother attended a one-room schoolhouse with a whopping twenty five other first-through-eighth-graders. Always an avid and astute learner, she skipped two whole grades, starting at Kutztown State Teachers College at the tender age of sixteen. Four years later, degree in hand, she began her teaching career at another one-room schoolhouse where her position included teacher, custodian, disciplinarian and nurse! These early experiences undoubtedly provided her uncanny strength and perseverance as well as an abundance of generosity, kindness and compassion that she cultivated throughout her life.

As fate may have it, while baby-sitting for the family where a strapping German immigrant rented a room, she met the love of her life, Wolfgang “Wolfie” Lonnes. The couple married in 1959 and refurbished an old stone farmhouse outside of Doylestown. Following the birth of their son Michael Wolfgang, and daughter Jessica Maria, Milliken transported the family down South in the winter of 1969, landing them, a horse and pony, a German shepherd and several cats in the rambling, quaint River House in Tryon’s Old Hunting Country. So began Joan’s illustrious life as a Tryonite!

Blessed with a beautiful singing voice, Joan joined the Rotary Chorus shortly after her arrival in Tryon, practicing diligently and performing biannually without fail, with the exception of four concerts, for 51 years. Her other great talent – words and their correct usage – compelled her to serve as the chorus secretary for most of that time as well. Joan’s devotion and commitment to the greater good led her to further volunteer opportunities at Holy Cross Episcopal Church including Sunday school teacher, choir member, handbell ringer, and editor of the church newsletter.

She could play a mean game of tennis, loving the competition, but better yet the camaraderie that outdoor activity provided. Despite her initial plane ride being in 1977 to visit relatives in Germany, from that point on she was uninhibited to traverse the country or the oceans to explore new environments, visit and partake in family celebrations of all kinds. At the spry age of 73, she spontaneously joined her daughter on a cross-country road-trip to California, providing much appreciated passenger-seat company and laughter as well as unequivocal map-reading prowess to the adventure.

As the owner of a small yarn and needlework shop, The Tortoise Shell, Joan’s impeccable needlepoint, knitting and other handwork skills have been recognized and admired for decades. She taught needlework at Tryon Arts & Crafts and was a constant go-to-person to fix a mistake, untangle a catastrophe, offer encouragement or finish a project that had long thwarted its respective owner! Her craftsmanship will live on in a needlepoint kneeler for the chapel in Holy Cross Episcopal that she was close to finishing at the time of her death.

Joan loved her family, her animals, and her community. As a proud and supportive mother, she was always in the bleachers or the sidelines or the stands, cheering her teams on, never missing a game. As a grandmother, she doted on her only grandson Sebastian. Between spontaneous boat rides on the lake, late-night puzzles, and interstate shipments of her beloved oysterettes (‘pilates’), Bita was particularly skilled at bringing a smile to Sebastian’s face. Her genuine nature of hospitality and culinary skill filled her kitchen and all those in it with home-cooked goodness prepared straight from the heart. Ranging from the cocktail and dinner parties of the 70’s to prom breakfasts for more than 100 highschoolers in the 80’s to baking for hospice through January of 2020, Joan lived the majority of her life in the kitchen – and loved every minute of providing for others through the gifts of her hands.

As an octogenarian, Joan’s ‘events calendar’ was impressive. She volunteered at Foothillls Humane Society, drove Meals-On-Wheels, played handbells at Holy Cross, contributed sweet and savory treats to a large number of organizations and community events (favorites including New York cheesecake, German potato salad, and secret rum cake), and never missed any type of fundraiser, especially if food was involved.  Joan could be counted on to serve her community with devotion, energy and joy. Her quick wit and uncanny ability to sum up a situation in the blink of an eye made her a well-known personality of unique and beautiful character.

Due to the international spread of her family as well as the current state of the world, a memorial celebration of her life will be held at a later date. Gifts in her behalf will be gratefully acknowledged by a charity of one’s choice.

An online guest register is available online at www.mcfarlandfuneralchapel.com